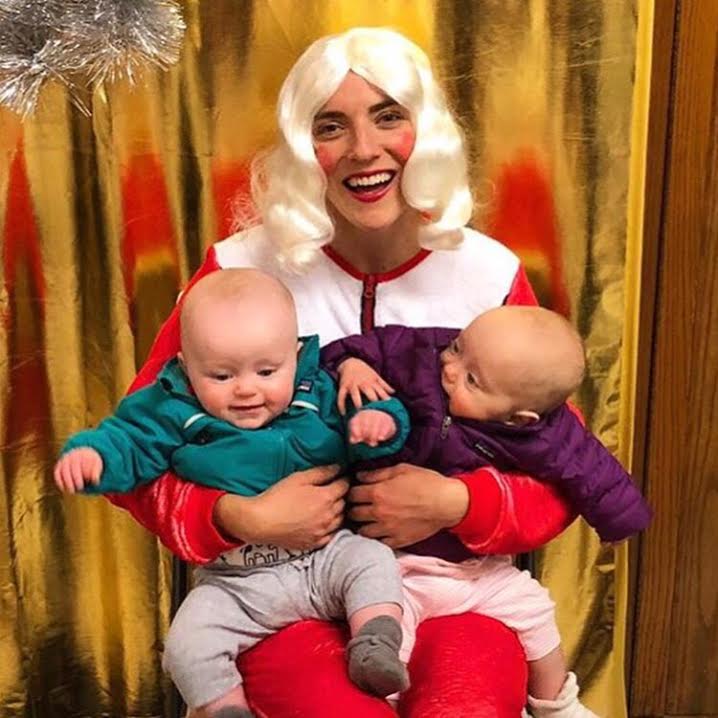 I can’t remember the day I met Joseph but I know it was on the sidewalk in Glendale, Queens,
just under the overpass that marks the end of Ridgewood and the beginning of Glendale. He was
sitting at a folding table full of marker drawings. From what I can remember now, there were
colorful portraits of Adam and Eve with big cartoon features and fruits and leaves covering their
private parts, drawings of Simpsons characters with many eyes (“alien versions”), and there were
definitely drawings of trains on train tracks that said “Ridgewood” in the negative space below
the train car. I know this because I bought one.

Joseph is a self-taught artist in his 70s and very spiritual. He once gave me a business card with
an image of his work and a statement on the back that said something like “buy my art before I
die.” We quickly became friends and I would visit him at the table during my walks through the
neighborhood. He had kind eyes and I could tell he lived there for a long time by the way locals
stopped to visit with him. We would sit on folding chairs and talk. Joseph was an expert at talking.

I asked about the store behind the table which had “Planet Fashion” painted on the façade in
stencil letters. In my memory the words are on an awning but either way they were hand painted.
Joseph decorated it for his wife, who was a nun before she moved here from Vietnam. He made
the store for her vintage collection where she sold items before it became what it is now, which
is kind of hard to describe.

Joseph was hesitant to show me the inside of the store but he caved when I asked to see the rest
of his portfolio. Clearly the store was no longer a business. His more risqué artwork—cartoons
with boobs-- were not the only thing displayed in the cluttered space, of which Joseph was
bashful. There were tons of toys, accordion panels with pins and buttons, shelves and glass cases
with far-out, drippy jewel-and-wax feather sculptures. My favorite part of being in the store was a
beautiful portrait of Joseph’s wife in her religious habit, hung on a fabric-draped panel. There were
glass jewelry cases with trinkets all around, and cases of Snapple at our feet.

Joseph said another self-taught artist made the wax sculptures. He pointed out, alongside his
work, the paintings of another artist, a woman I could tell was sort of like Joseph’s creative soul
mate. It was clear to me Joseph and his wife fostered a rich life with many inspiring friends, and
it was apparent that Joseph and this particular artist collaborated often. I flipped through binders
of print-outs from their past shows. I learned Joseph used to conduct open studio drawing
sessions in Planet Fashion until someone started acting out and things went awry. Now his
community outreach stems from the Glendale Maspeth United Methodist Church, which is kind
of center of this essay and where I had a revelation while dressed as Santa.

I had talked a lot with Joseph about my art practice and when he invited me to participate in a
group show at the church I eagerly obliged. We met one afternoon inside Planet Fashion where
he gave me flyers for promo, and photographed me with several of his Santa toys including a
Santa troll. A newspaper in Queens wrote about the show and said something like a “possible
performance artist” might make an appearance. Considering the way I regard my own work, this
wording was perfect. I was honored to participate.
On April 7th, 2018, I showed up at the Glendale Maspeth United Methodist Church basement in
my Santa costume which was inevitably compromised because I always I lose bits and pieces
between performances. This day I wore a Santa-printed fleece onesie and could not find my
beard so really it was more of a Mrs. Clause. I painted red circles on my cheeks once I accepted
this, to embrace my feminine status and show I could be flexible.

In the basement there was a poignant sense of community. Tables lined the periphery of the
room where artists displayed their paintings, collages, mixed media pieces, and sculptures.
Women from the church served refreshments. Some of my friends came to visit “Santa’s
Workshop” in the back where I provided macaroni, play-doh, and coal. Children seemed to like
the macaroni and playdoh best and left me some of their finest work as gifts. It was like they reverse
Santa'd me. Most of the artists in the show were older than me, lived or grew up in the neighborhood,
and were active in the church.

At some point Joseph said “Ok everyone, let’s gather around.” It was time for the artist talks. We
all set up chairs in a circle in the middle of the room. Joseph went first, then we all went around
introducing ourselves and shared how we came to make art. People shared stories about
overcoming adverse circumstances: legal trouble, custody battles, health crises, and finding
solace in creativity. Everyone was so sincere some of us were moved to tears. It was so moving,
in fact, by the time it was my turn I forgot I was dressed like a caricature of Mrs. Clause in children’s
pajamas. I shared my story earnestly. We were all so vulnerable. The costume had evaporated. 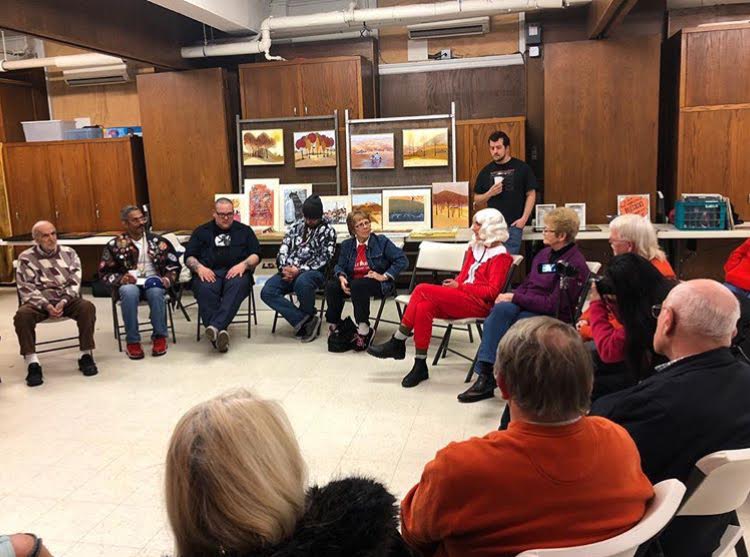