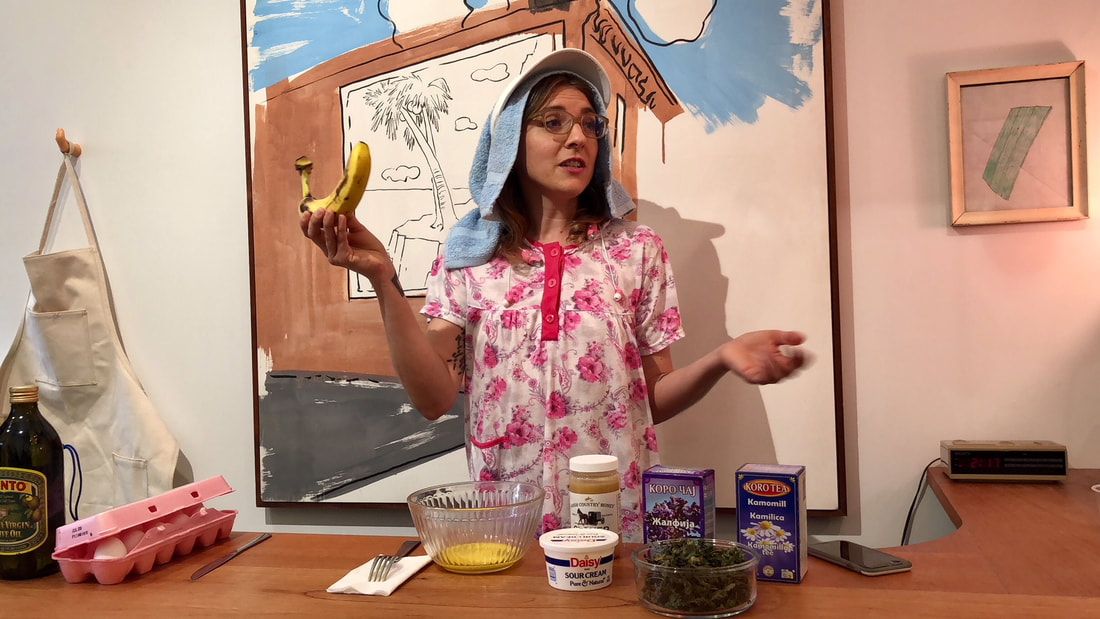 The following is an essay I wrote for the second issue of Pedestrian Magazine (http://www.alexander-wolfe.com/tagged/pedestrian) followed by a video of my performance at Capsule Gallery on June 16th, 2018:
I first met Dara on the street one day while on my way to the laundromat. She was leaning on the metal gate outside my apartment wearing a long, navy blue, knit vest over a white blouse and long, black skirt. Her hair was wrapped up in a bun that was secured with a plastic flexi comb headband. The bun was draped in a black scarf and around the scarf, a matching black visor kept the hairstyle in place like a crown.

When I opened the door I was startled. “Hi!” She was just a few feet away with her dolly full of bags. She turned around and looked at me through her big glasses and smiled. “Hi Hohn-ey.” Despite my surprise there was something immediately comfortable about the exchange. I felt like I’d seen her before; was pretty sure she asked me for a cigarette once. Or maybe upon seeing her I suddenly remembered an appointment we never made. She explained she was waiting for her friend, an older gentleman (NOT her boyfriend) to pick her up and bring her to his house so she could make dinner, which she cooked for him every day. Dara asked me if I would come to her house and translate her mail sometime by reading it out loud.  She had trouble reading anything written in English. I obliged, and as a reward she gave me five pieces of cinnamon Trident chewing gum.

Since then I have acquired an entire wardrobe from Dara as payment for doing favors including a pair of green sweatpants and a black skirt meant to be worn as an ensemble. Also among my acquisitions are several knit dresses, khaki pants, earrings, a bottle of used nail polish, instant coffee in a jar, crackers, a bag of sunflower seeds, a tube of Nice ’n Easy hair conditioner, Jasmine flowers, apples, an Abercrombie and Fitch sweatshirt, and a special mask which Dara demonstrated on my hair when we had “beauty salon” one Sunday morning at her apartment.

One of my favorite things is being invited into someone else’s home. It’s an honor- the ultimate privilege (and a singular one)- to experience someone in his or her most intimate environment. Dara has lived in her second story apartment for thirty six years, ever since she moved to Ridgewood from Serbia, and she has the tchotchkes to prove it. The living room is curated with shelves of memorabilia: plastic toys, tarot cards, stacks of magazines from Capital City, dolls, photographs, and ceramic candy dishes. Sometimes she reads to me from her magazines. Often the topic is organ trafficking, one of Dara’s worst fears. Two lace curtains tied with red ribbons provide a segue from the kitchen to the living room. The spare bedroom stores a fold-up bed though Dara sleeps in a chair in the living room. Photos are pinned to the blue wooden paneling of the bedroom walls. Since she lost her daughter a year ago, an altar takes precedent in the periphery of the living room; holy candles burn brightly around prayer cards and a portrait of Dara’s daughter. She wears her hair like her mother: a braided bun wrapped neatly and coiled on top of her head, softly framing her face that captures her demure smile.

Also in the living room is a shelf with a portrait of Dara’s friend, John. It is an old fashioned, color-corrected photo of a handsome guy with greaser hair, a crooked smile, and a collared shirt. Tucked in the frame of the portrait is a polaroid. The polaroid is a photo of the same portrait, except in the polaroid the framed photo is balancing on two prosthetic legs. The arrangement is a still life Dara designed and photographed herself, as a tribute to John, a double amputee. Dara took care of him until he passed away, a similar relationship, it seems, to the one she has with the man who picks her up every day on the corner of our street.

Dara told me John spent the last days of his life in a small town in northeast Pennsylvania. Coincidentally this is close to where I grew up and even closer to where I have my trailer and plot of land. When I told her about this, Dara was excited because she had been wanting someone to go to the local bank and investigate where the money went. This was the inheritance she felt she was entitled to after John died. Always up for this sort of venture, I made an appointment with a consultant at the PNC bank in Hazleton. When I started explaining to the executive, however, I realized my plea appeared abstract without any paperwork.

One day I noticed something strange about the altar in Dara’s living room. The mugs that held the holy candles had messages on them. They read: “Chocolate is always the answer” and “Bacon is the reason I get up in the morning.” It seemed odd to have cheeky comments as part of the memorial. When I pointed and kind of laughed Dara asked, “How it says?” I didn’t have the heart to tell her they were jokes. The text on the mugs sounded like things Dara might say. For example, when I brought her cough medicine once she kept saying: “I robber to you tonight.” (She meant “I’m stealing from you.”) Or a few weeks ago when she told me her landlord never responded to her complaint about water on the roof: “He’s quiet like a fish.” I laughed and asked “What’s that supposed to mean?” to which she responded logically: “Fish don’t talk.”

From when we first met on the street, Dara was like a mysterious vision. I think about the way her cigarette smoke wafts around her apartment, clouding old world mementos. She often laments the loss of family members while we drink special coffee that she boils with tons of cream and sugar on the stove. Once when my allergies were especially bad, she held my head and poured cold chamomile tea directly into my eyes. Another time Dara scolded me for wearing sandals without socks, insisting it would destroy my ovaries. When I tried to hug her she recoiled, stressing her point. (“How you make’a husband if no take care’a self?”) Recently she asked me to write a grievance to National Grid on her behalf. Dara orated her complaints which I wrote in her spiral notebook. She said she would send the letter to the gas company. I wasn’t sure if I should summarize her words, or if I was supposed to transcribe the statements directly, including: “You suck like snake to the life.” The language barrier is authentic but she knows she’s funny.