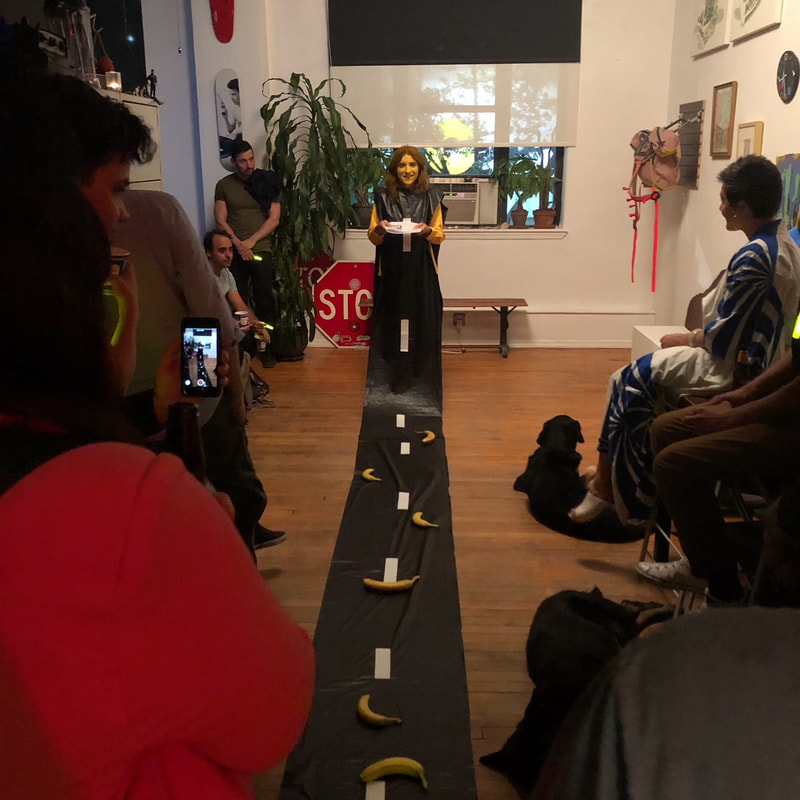 For this piece I dressed as a highway covered in bananas and read my essay called "Out of Many, One" from the 9th issue of F magazine: The Spirit (Fall 2019).

On Sunday, May 5th, 2019 I missed a call from an unknown number. A guy named Eric left me a voicemail asking me to “bring back the banana load.” He informed me that I was “off the bananas” and that I was supposed to return the delivery to the dock. It seemed that Eric worked for a trucking company. I saved the message, thinking it was a prank.

The next day I texted it to friends. Someone responded with a link to a song called “Thirty Thousand Pounds of Bananas” by Harry Chapin. The ’70s rock ballad is inspired by the true story of a 1965 banana truck accident that happened in my hometown: Scranton, Pennsylvania. On that day, a driver named Eugene Sesky was making a delivery. He lost control of the brakes due to a mechanical mishap as he descended the highway. Plummeting into town at ninety miles an hour, Sesky stepped out onto the running board to warn pedestrians of the imminent disaster. Sesky then smashed his Brockway diesel truck tractor with a 35-foot semi-trailer into the front of a house, spewing fifteen tons of bananas along the interstate in a bizarre explosion, coating the macadam in a blanket of fresh yellow. Sixteen people were injured. Sesky was the only one who died in the collision.

As fate would have it, the site of the crash was Route 307, the haunted highway I've been documenting most of my life. As a teenager I was obsessed with an abandoned trailer in its woods. The family who once lived there fled suddenly, leaving everything behind. I slept there sometimes, wondering if I would be swallowed by the black hole that seemed to surround the topography. Mutilated animals, fugitives, and pedophiles were no strangers to Route 307, or as I called it, "the vortex." Such characters often surfaced there, in the news. The highway seemed to attract macabre phenomena.
I couldn’t believe the site of Sesky's tragedy. My friend couldn’t believe I didn’t know the song, as the incident was locally famous. Through the phantom phone call, and my connection to specific geography, I understood I was being summoned to investigate this event.

I began to obsess about the accident. I learned that Eugene Sesky crashed into house number 804. My mother’s current apartment number in Scranton is 804, just down the street. My house number growing up was 33. Sesky was 33 when he died. I'm about to be 33! These revelations made me feel like I was onto something. Further, I discovered that bananas, when peeled, separate into three sections: a triad that runs the length of the fruit. How could one not relate this organic trinity to the Father, Son, and Holy Spirit? After all, Jesus died when he was 33, too. I began to consider the banana a spiritual conduit: an illusion of plurality when there is really just one. An article in Newsweek validated this theory when I read that all contemporary bananas are clones. Since a fungal disease nearly wiped out the Gros Michel banana in the 1950s, all subsequent Cavendish bananas are genetic replicas, sharing identical DNA from the same cultivar. I was excited by the idea that modern-day bananas are doppelgängers.
Alongside my banana research, I wanted to do some footwork. I posted ads on Craigslist requesting interviews with Scrantonians who recalled Sesky’s crash. I drove to Pennsylvania late one night with hopes of speaking with the people who responded to me. I wanted firsthand information. The following morning I went to DiMare Fresh Scranton, the produce company that was originally tied to the accident. When I arrived at the cinder-block facility I noticed, taped to the glass at the reception desk, two black-and-white computer printouts: one image of a roma tomato and one of a round tomato, providing a visual distinction for two representations of the same nightshade. Each xerox had a heading above the respective image. Beside each other they read "roma, round." I, too, must roam around, I thought, to find an answer, or the answer, to this mystery.
My decision to schedule interviews, show up at DiMare Fresh Scranton, and retrace Sesky’s “footsteps” all seemed natural to me, as attempts toward understanding why Eric contacted me. I am not sure how I know it, but the phone call from Eric was on behalf of Sesky. Perhaps Sesky knew of my capacity to channel the forces of Route 307, and he wanted me to know something about the heavy presence that interfered with his last moments of life. It could also be something about the duplicitous nature of the Cavendish banana; time will tell. Either way, I know Sesky wants me to know something that is missing from his story. I will seek until I find it. Like the banana, the search is a symbol of faith.

While at DiMare Fresh Scranton, I spoke to some employees wearing hairnets, but nobody could tell me anything new about the accident. Later that afternoon, I was supposed to meet with someone named Norm from Craigslist for an interview but he called to cancel while I was at DiMare. On my way out of the building I saw a sign on the glass next to the tomato references. It said: ”If YOU are in a HURRY then YOU are in the wrong place.”

Since I started working on the banana story I had two car accidents. Neither of them were my fault and I kept them secret. These impacts, rather, seemed to have sought me like Sesky did through Eric. I thought perhaps these accidents were related to Sesky as well. One happened the morning I was investigating in Scranton, in the parking garage outside apartment 804: a fender bender. The first accident happened in Midtown during rush hour, a few weeks earlier. A Range Rover sideswiped me on Madison Avenue while I was turning right. It was all so sudden, no one could believe it happened. There was a disconnect looking at the impact, wondering about the now absent force that caused it. I imagine seeing thirty thousand pounds of bananas scattered on a highway might have the same effect.
Accidents happen to everyone. Our brains fumble over the series of events leading up to them, in an attempt to make sense of the how and why. They make us ask “where did that come from?” signifying some alternative zone, or active state, where inception and transmission, cause and effect, become blurred. In the end we’re left with an otherworldly feeling that grasps at origin.
Eugene Sesky was just making a banana run when he lost control of the brakes. He was the unfortunate example that caused all subsequent truck deliveries to Scranton to be rerouted on Interstate 380, since the grade of Route 307 was too steep to allow drivers to stay in control, to stay in contact with the physical plane.
Accidents make us immediately aware of our humanity, but only when we survive these brushes with death. In Sesky's case, the delivery was permanently severed. The question is, can this missed connection be completed elsewhere?
My phone broke while I was writing this piece. Thankfully I had sent the banana voicemail to friends who were able to text it back to me, but I lost the callback number. All I know is that Eric had an Ohio area code. I have a running ad in the Lost & Found section of the Columbus Dispatch: