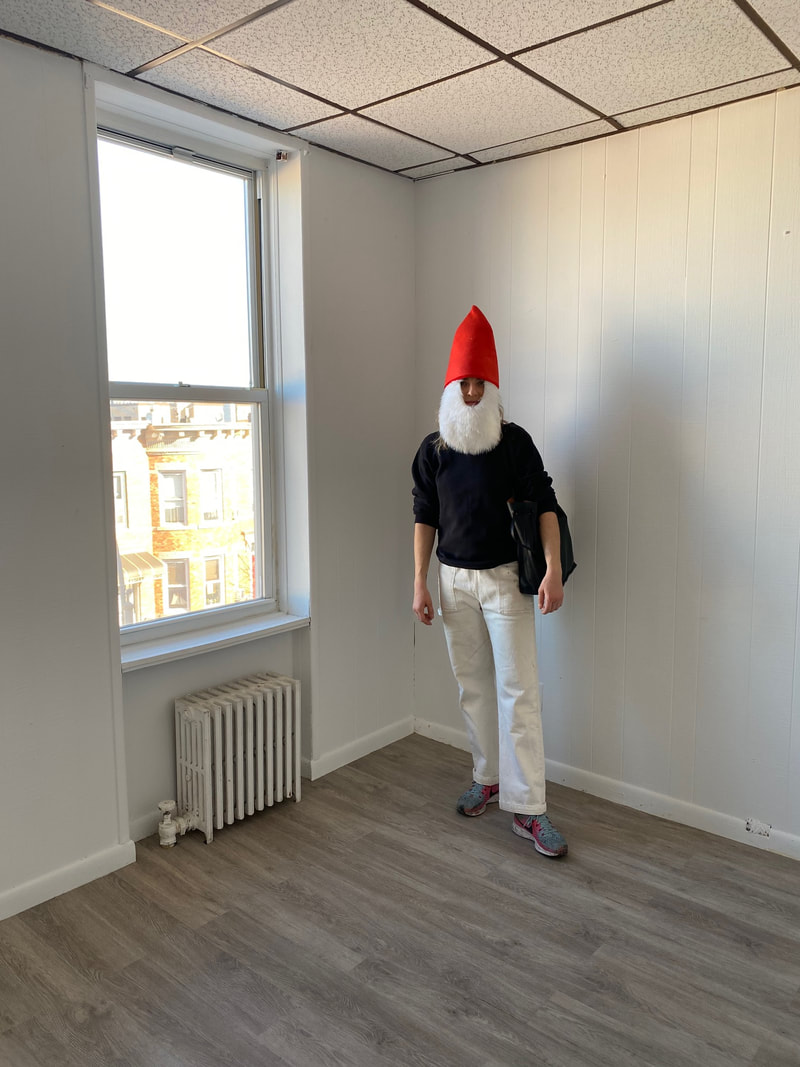 From 2012-2016 I did “Real Estate Performances.” This ongoing, private project included making appointments with realtors to see homes in a specific coal mining region of Northeast Pennsylvania, proxy to my hometown. Most of the houses were abandoned, in disrepair, and very cheap.

For these appointments I wore a uniform: white pants, a white sweatshirt, and white Reebok high-tops. My strategy was to say, “Oh, I forgot to take pictures, do you mind if I go back upstairs?” Most of the time the realtor would let me go by myself. I would then, in a rush, set up my camera, take off my jacket, record a short video of myself dancing or doing cartwheels, put on my coat, and meet the realtor again downstairs.

In April of 2018 I was planning a different performance in New York. I was going to be off-season Santa, a recurring character in my work. The first time I did this performance, barely anybody noticed. I hung out in a shopping mall and sang songs on the balcony. Instead of attracting lots of attention, I met a young man who unironically challenged me to a Dance Dance Revolution competition in the arcade. He was visiting from out of town, selling magazines. I obliged to the face-off; he never acknowledged my costume. The second time I was Santa was in the basement of a church in Glendale, Queens. I had been invited by a friend to participate in a group art show there. When everyone gathered in a circle to share about their work, I gave one of the most earnest speeches I’ve ever given in front of a crowd. Everyone listened with undivided attention about what inspires me to make art. The red circles painted on my cheeks, my curly white wig, and my fleece Santa onesie were of no consequence to the audience. I, on the other hand, became visible. I have come to call this phenomenon the Invisibility of Santa.

For this 2018 church basement performance I needed coal for my "workshop." I researched where I could make this purchase and discovered Weirfield Coal Company down the street from my apartment in Ridgewood. There I met Andrew, the owner, a terse Italian man who gave me a pro bono bag of anthracite because I knew the name of it. I told him it was for an art project and that I would let him know how it went. In the meantime, Andrew was so impressed by my knowledge of coal, he spontaneously offered to show me one of the apartments he had on the market, even though I wasn’t planning on moving. It was a few blocks from the coal yard: a beautiful rental on the third floor with lots of natural light.

When a friend said she was moving to Ridgewood a few months later, I called Andrew. The apartment was still available. We showed up at his office together. It was in an old, one-story brick building with linoleum floors and framed pictures of antique cars all over the wall. Andrew handed me multiple sets of keys with addresses written on them. He told me I could show her the apartments myself and to return the keys when we were done. He went back to polishing a brass horn.

At first I thought he was joking, but I kept this role of intermediate realtor with Andrew for about a year. Each time a friend expressed interest in the neighborhood, I contacted him for our arrangement: an agreement we never made but abided. I loved this temporary identity and showing Andrew’s apartments as if they belonged to me. Every time I returned the keys he gave me ten dollars. I did the first showing for free as thanks for the bag of coal.

Andrew and I stay in touch even though I no longer show his properties. On Thursday, January 23rd I texted him for a favor. I asked if he would photograph me in one of his vacant apartments. I planned to arrive dressed as Santa, the persona that originally brought us together. Party City didn’t have any off-season Santa costumes so I had to buy a gnome hat with an attached beard that sort of resembled Santa. When I explained to Andrew the cause for the identity shift, he didn’t care. He took this photo of me on the third floor of an apartment on Madison Street in Ridgewood, Queens on February 15th, 2020.