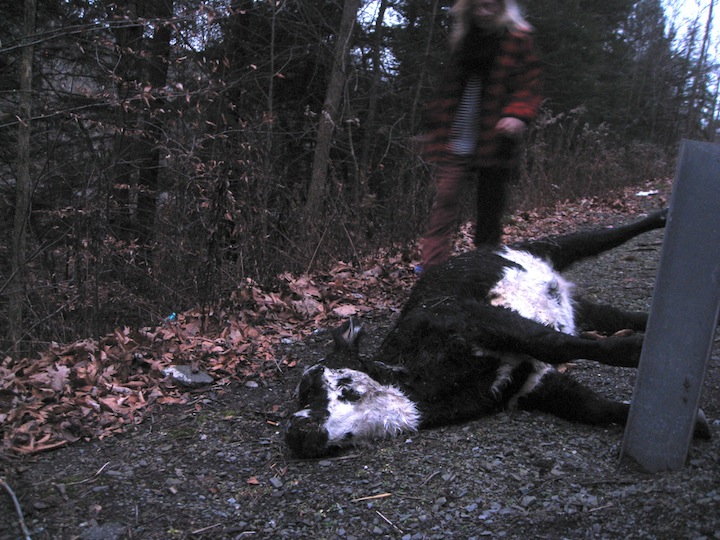 A few years ago while driving through the country I spotted a dead cow lying on its side, fully intact, beside a guard rail along a small paved road.  There was no sign of injury or violence. The vision haunted me for days.

I contacted a friend who would serve as my accomplice, and we devised a plan.  We drove to the location at night and I dropped him off.  He hopped over the guard rail and began sawing off the four hooves.

I continued driving for several miles.  I clocked fifteen minutes, the time on which we agreed for my return.  Once I drove back over the hill I flashed the high beams twice, our signal.  He entered the vehicle with a plastic bag.  In my studio I cleaned and tanned hooves.

Once I returned to New York I called him on the phone and asked him to recap the experience.  I wrote as he retold:

The legs were totally stiff
What if I lost my cell phone there and they knew it was me?
I'd be in trouble probably
some mutilating something-or-other

It was pitch black
Slowly my eyes adjusted and it wasn't that bad
I just kept thinking, I gotta get this done

The sawing was just a ripping sound, through fur and tendons
Bone more or less sounded like wood
A saw through bone

My adrenaline was pumping so hard I knew I was hurting myself more than I could feel
If I kept going I'd'a ripped a chunk outta my hand
I didn't even know is that blade was gonna cut through the one and a half legs that were left
Every time I cut a leg off I threw it in the bag, wanted to keep 'em together
Didn't want any legs floating around