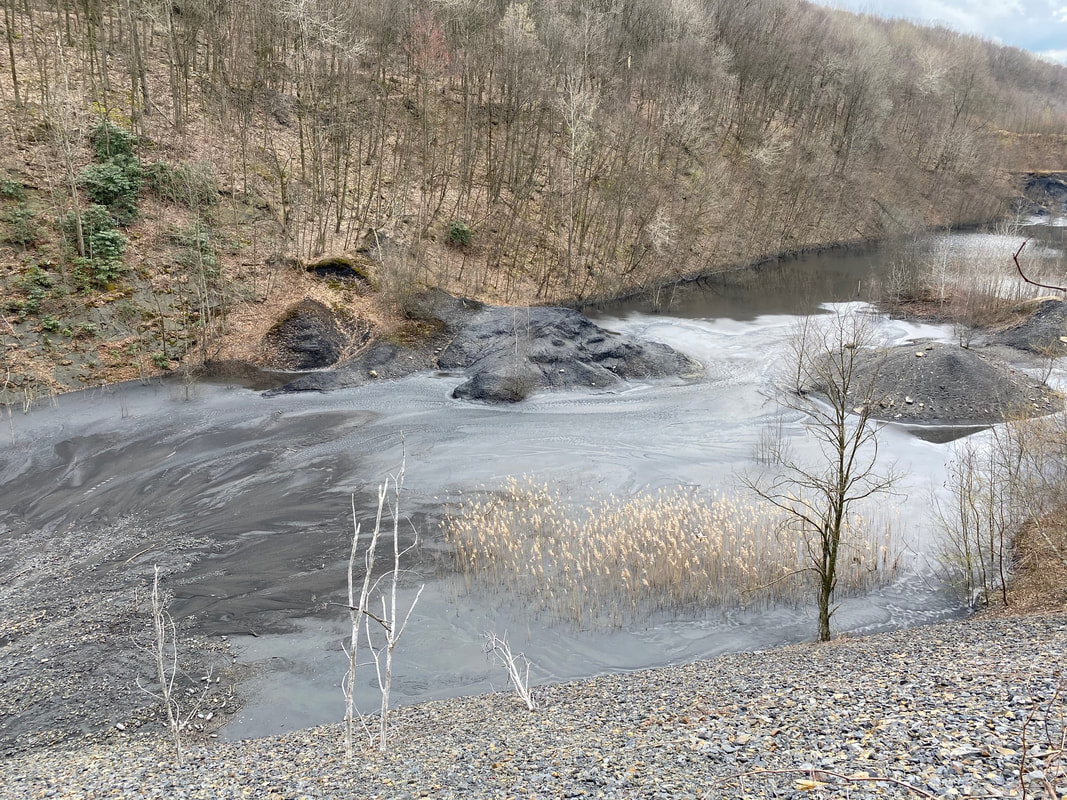 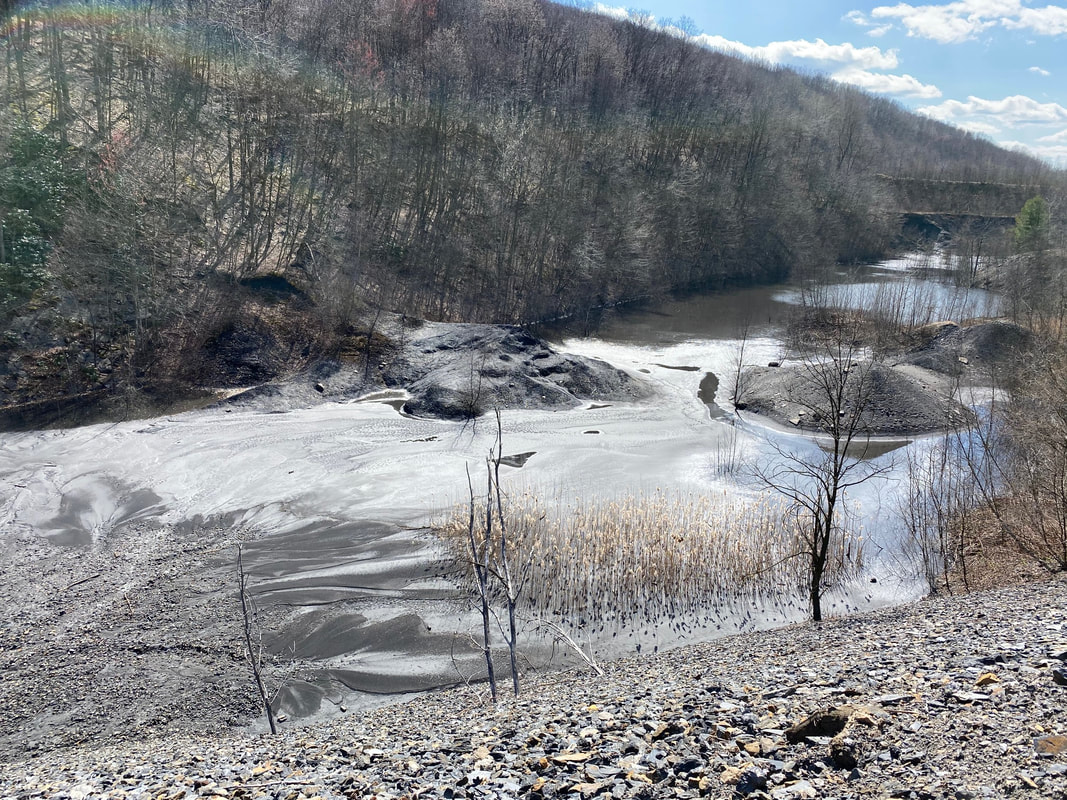 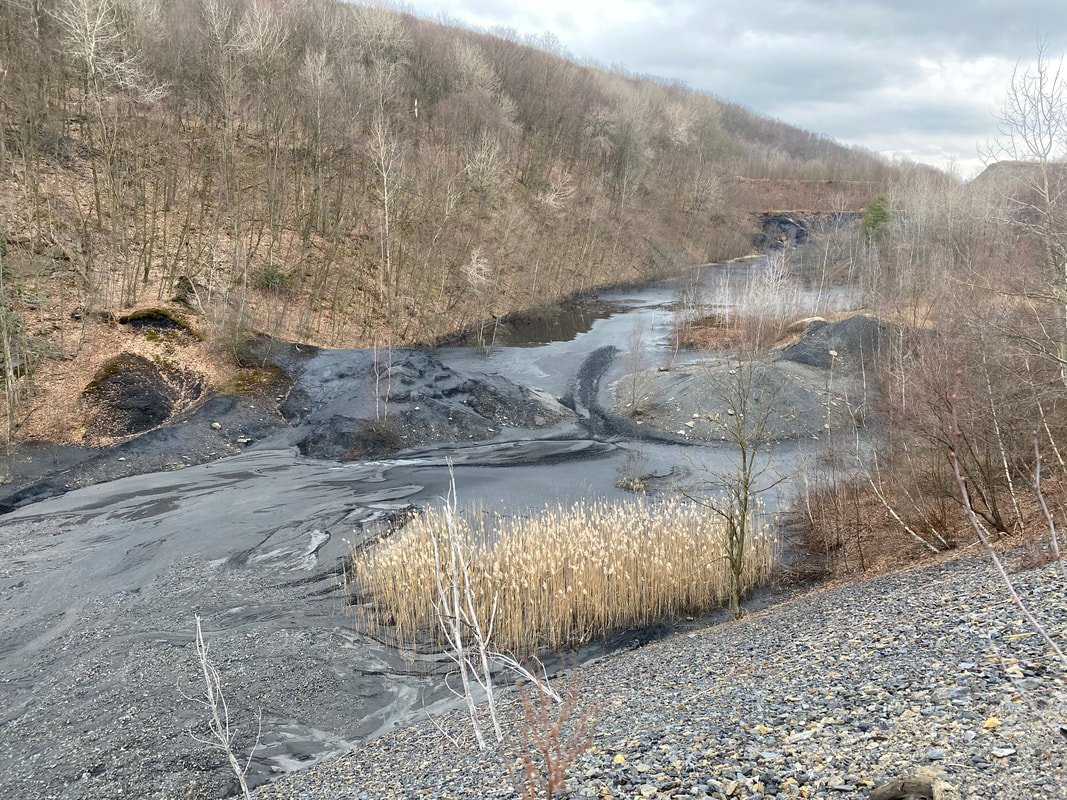 The setting was the strip mine in Gilberton, the area I reference at the end of my book. It’s at the top of the hill, a basin within the towering black hills that overlook the town. Specifically, in this dream, I was watching my shadow projected onto a particular mound of slurry. I often stare at this mound when I sit on the shale ring surrounding the opening. The view reveals a deep valley of indeterminate sludge that appears to have frozen in motion.

This mound of slurry changes. It is always there but in the summer it dries out and cracks; it looks volcanic, arid, prehistoric. From far away the cracks look like black veins swallowing ancient igneous. Close-up, it looks more like cake. To get up close, you have to surf down the shale slope, coasting sideways with just enough traction from the chunks of anthracite to resist momentum. It creates a cascade-- a waterfall no one else can hear. At the base of this shale slope is the same cracked slurry that constitutes the mound except the mound is also made of glittery silt. The mound is covered in a grainy blanket of coal crust, a bubbly texture engulfing the turbid matrix of refuse.

In this dream I was looking at the mound from up high, sitting on the ring of shale at the top of the slope. And in the projection (I was seeing this on a screen) I could see my shadow throwing a crystal out of the frame. Then the motion re-wound and the crystal came flying back onto the screen and into my hand. Then I threw the crystal again, out of sight, out of the frame, and in perfect reverse the crystal came flying back like a boomerang into my grasp. I watched this repetition several times and even noticed my form, the way my arm and wrist moved.

This crystal-- I knew it was a crystal not because I was holding a physical object. Unlike the opacity of my shadow, light passed through what I held. Its “shadow” was a beacon, a glittery transmission one might see while shining a beam through a prism. In this dream it was a diamond: the ultimate, fantastic clarity married to decaying carbon, to atomic transformation, to prolonged pressure, to chemical change, to synthesis, to coal and its metamorphosis.