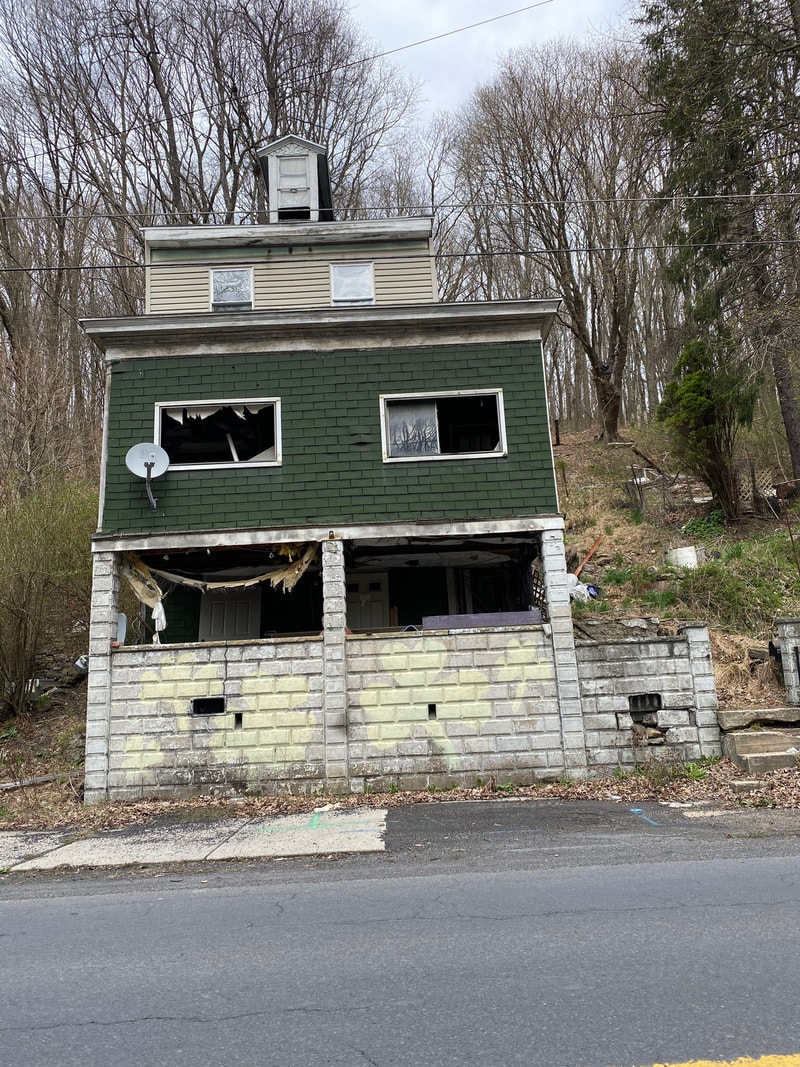 Patrick and I left NYC yesterday and picked up a plastic “suntanned Santa" from Craigslist on the way to Gilberton. We pulled into a gravel driveway of a brick house in Easton, PA. I Venmo’d a man named Carlos $55 for the plastic decoration.

We spent the afternoon in Gilberton then drove around the hills toward Mahanoy Plane, past the dense pine grove in Girardville (repeated setting for dreams) and right toward the fork, where, at the top, you can choose to go left, seven miles to Ashland, or right, four miles to Shenandoah. We turned right.

The sun was now behind us as we wove through the narrow, windy road. Homes on the right were slouched and attached. Homes on the left were tall and narrow, falling apart. We passed the big white house on the left covered in vines with the cement wall which sits on a grassy hill that borders the road.

After the white house, we curved around the bend, past the cemetery on the left which recedes into a grassy black mass at the peak of a steep slope. It's so steep it's graduated, separated into tiers. It looks like the whole thing is about to slide off the landscape including the tombstones.

I interrupted Patrick: “A Santa!” I saw the back of his plastic, red and white head to the left on the front porch of an abandoned house.

P: You rigorously ascended the hill

A: I saw the Santa on the porch first, with Frosty. They were a pair.

Patrick heard me say: “There’s another one!”

P: You went up the hill. I didn’t see you anymore and I heard you say “There’s another one!”

(I saw the duplicated Santa silently & on my own.)

P: Yeah, I was just like “Another what?” and you said “Another Santa and Frosty.”

That’s when Patrick started walking up the hill, too.

One (Santa) in front midway across the front of the house on the porch, and one in the center of the side of the house

Both Santas had a Frosty beside them. Both pairs were facing the house: one set in front on the porch, and one set along the side of the house. The placement looked intentional.

I got lured in by Santa.

First I saw: the back of Santa’s head on the porch.

Then I ran up the concrete steps alongside the front porch and discovered another pair of Frosty-Santa on the side of the house, positioned together, side-by-side, facing the house, their backs facing me but they were angled as if they were looking at something. Something in the house.

Both Santas’ backs were facing us. We were all facing the house. Frosty seemed definitively placed with Santa. The pairs were identical.

I picked up the Santa on the side of the house. I stood with him in my arms, my hand on his head. We faced the road. Then I put him back and I looked at him.

At this point Patrick and I were standing together. That was when he started noticing the environment while I was still fixated on Santa.

Patrick started noticing homemade cages made of chicken wire with the fronts torn out. They were covered in shit. He also noticed giant fish tanks, five or six feet long. He saw four tanks on the porch and two tall, octagonal ones in the backyard.

I kept remarking about Santa. Patrick was commenting on the reptile tanks. At some point we realized we weren’t talking about the same thing. At no point, up until then, did we acknowledge we felt bad there.

Patrick pointed up the hill. I started walking up there “pretty far” he said, without looking back.

Patrick said that was the moment things shifted from “this is really fuckin weird” to “this feels really bad." I said I felt the same way about that moment.

At the apex of the hill, behind a chicken-wire fence there was an enclosed structure with a chimney protruding. The structure was the size of an outhouse. I didn’t make it that far. But that is the image that stopped me in my tracks and what sticks in my mind now. The part that remains most salient to Patrick is the front porch.

P: “It felt like the aperture between outside & inside that was really uncomfortable.”

The front door to the house had two locks on it. One was a broken padlock. The other was a red cross bar meant for a car steering wheel (a “club”) which was bolted to the door frame on either side with two rusty steel hinges with 100 screws haphazardly driven into the aluminum.

I lifted Santa in my arms from the side of the house and put him in the car. Then, while in the car I was like “Should I go get the other one?”

We stood on the side of the porch, deliberating. It felt stressful as if time was running out. Before getting caught?

Patrick thought the circular saw blade hanging on the wall beside the porch was a sander but I saw the teeth.

I looked at the front door and wondered how long it would take to scale the porch, navigating all its debris, to retrieve the second Santa. I imagined Leatherface bursting from the doorway and grabbing me from the waist. Santa was a few yards away, leaning against the railing. He was partially covered by what looked like a sheet of insulation. It seemed like the perfect trap: Santa planted among just the right amount of obstacles for someone to abush me should I be tempted.

Patrick pointed out the Santa I abducted had been bleached of color except the blue of his eyes. “Like mine” I said. “You and Santa are the same guy” he said. 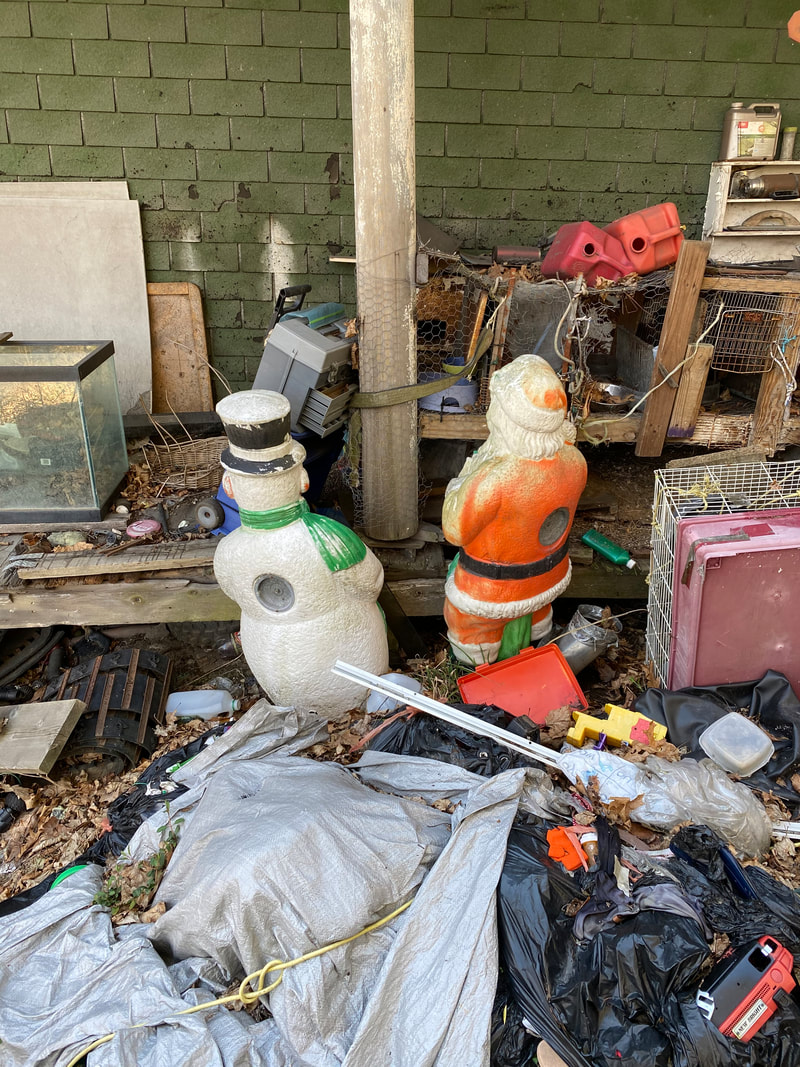 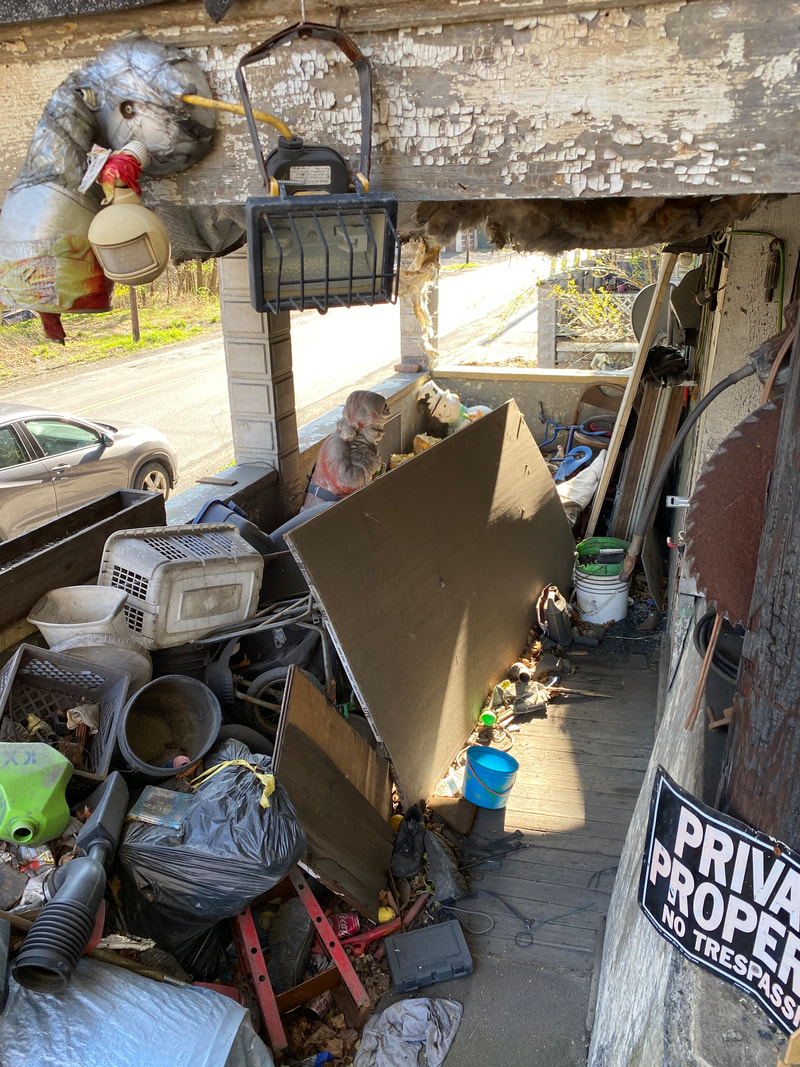 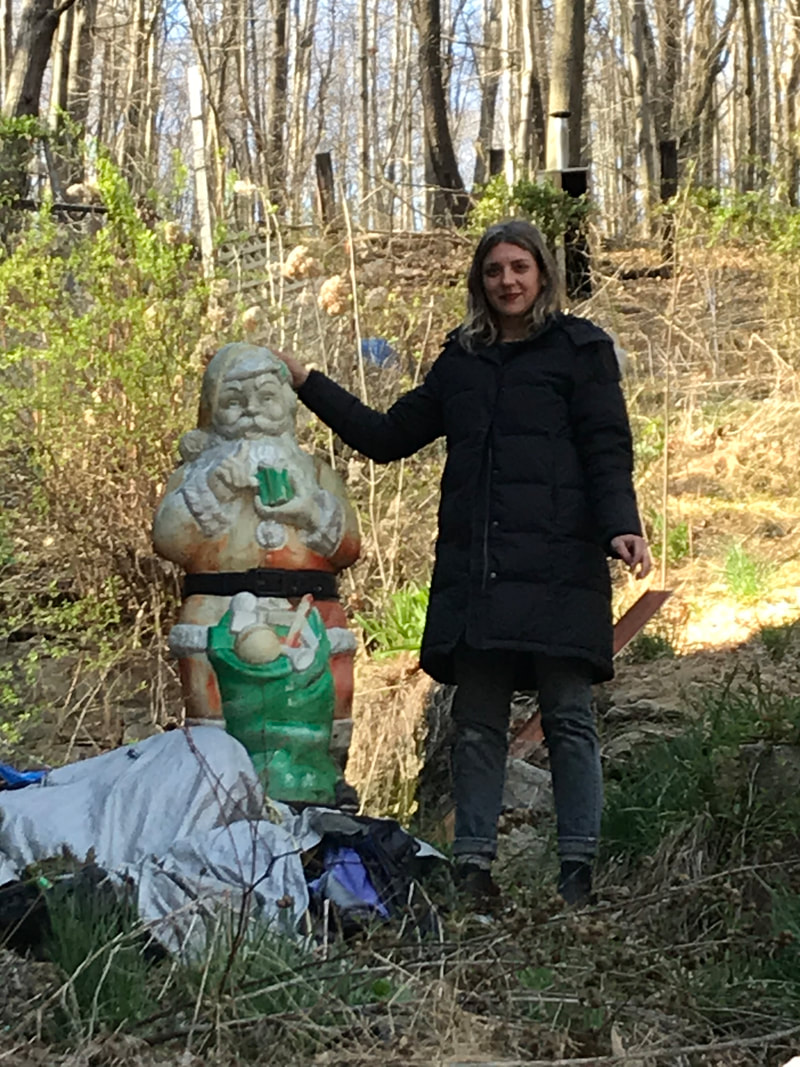